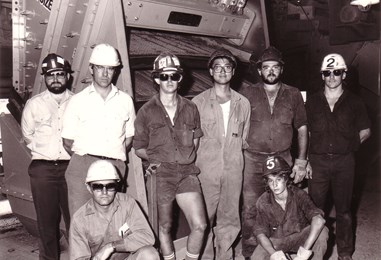 In the early 1980s, Mechanical engineer John Russell was Officer in charge of Maintenance in the Mount Isa Mines (MIM) Copper Concentrator, at the time a crushing, rod-milling and ball-milling comminution plant, followed by flotation.

Mill relining was an intensely manual activity; dangerous and very time consuming. The vision was to mechanise the entire mill relining process, shorten reline times, shorten overall shut-down times, increase plant utilisation, increase mine site profitability, all achieved while concurrently improving the safety of the working environment… and by a large margin. 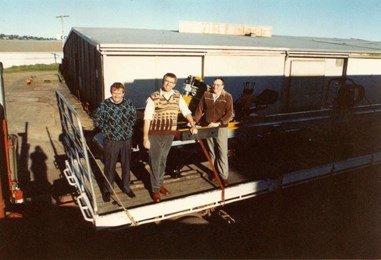 Russell Mineral Equipment (RME) was established in 1985-86, and its logo was “RME” inside a grinding mill cross-section graphic. By 1990, RME consisted of a team of three: two mechanical engineers Peter Rubie and John Russell and draftsman, Doug Nield. 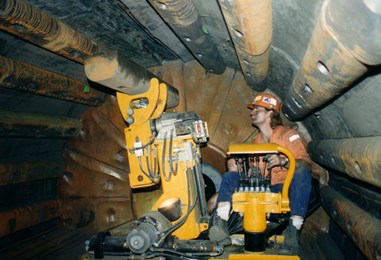 RME’s first mill relining machine a RUSSELL 6, was commissioned in August 1990 by MIM for their lead zinc concentrator rod mills.

As a direct result of this RUSSELL 6, rod mill relining times dropped from 44 hours to 24 hours: two 12 hour shifts. 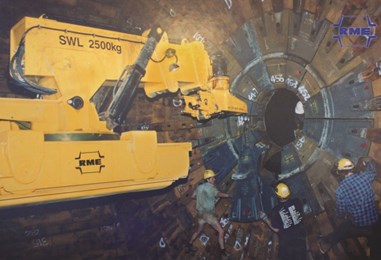 RME then produced a short promotional video of this first RUSSELL 6. This film so impressed Western Mining Corporation (WMC) engineers that RME was chosen to design and supply an RME Mill Relining Machine to the new Leinster Nickel Project in Western Australia.

Commissioned in 1992, the huge RUSSELL 7 Mill Relining Machine continues to service Leinster’s 32-foot diameter SAG mill to this day. The Leinster RUSSELL 7 was the first, large-capacity, liner-placement Mill Relining Machine ever attempted. RME understand that it was the largest capacity ‘liner handler’ of any type in the world at the time, capable of lifting 2500kg/5500Ib liners. 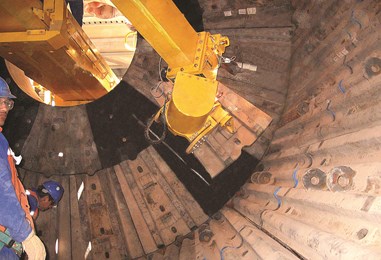 Contract mill relining crews were totally unfamiliar with the concept of liner placement and were initially reluctant to use the RUSSELL 7 Mill Relining Machine to its full potential. After all RME was promising that the RUSSELL 7 could lift and precisely place liners weighing up to 2500kgs in any position inside the mill.

The unbreakability of the RUSSELL 7 was a revelation.

With ever-growing confidence in the reliability of the RUSSELL 7, these mill relining crews began to experiment with liner placement. They never looked back. 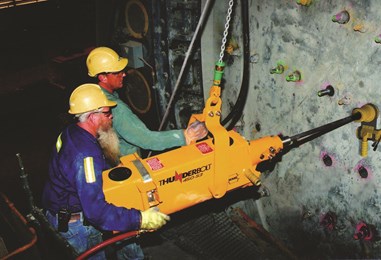 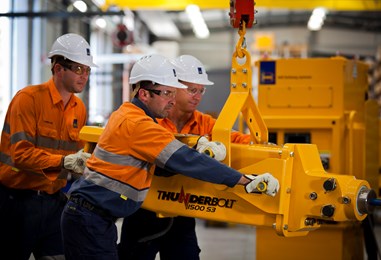 In 1999, the Escondida copper mine in Chile, South America, commissioned a larger THUNDERBOLT Recoilless Hammer, now known as the THUNDERBOLT 1500 Recoilless Hammer. The toughest SAG mill discharge-end bolts yield to the relentless force delivered by this mighty hammer. 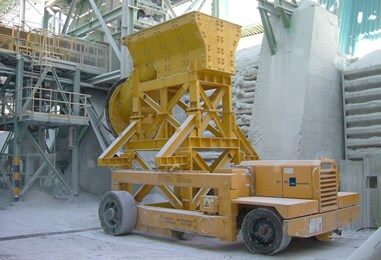 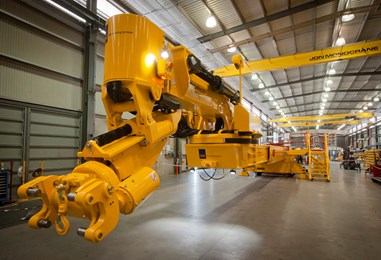 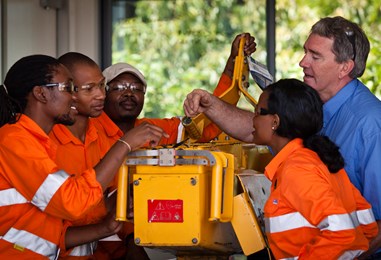 The operator skill problem was solved by working with the Southern Queensland Institute of Technical and Further Education (TAFE), a registered training authority, to develop specific training courses for the operation of RME Mill Relining Machines and RME THUNDERBOLT Recoilless Hammers. Graduates receive Queensland State Government certificates in the operation of both of these RME technologies. 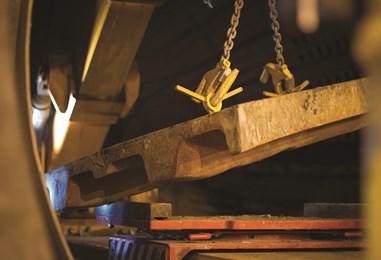 Kittel’s Time and Motion Studies also exposed the time taken to pick up worn liners from the Mill charge after they’d been dislodged from the Mill shell. This insight led to the development of the O-ZONE Worn Liner Lifting Tool range.

One minute saved per liner doesn’t sound much, but in a large Ball mill featuring over 300 liners, this represents a time saving of five hours, a result proven on the first use of the O-ZONE tools. 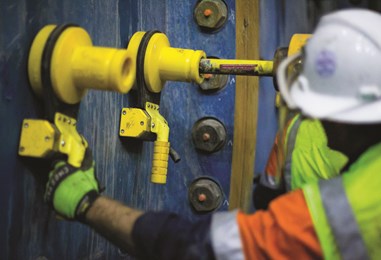 The third insight from the Kittel Time and Motion Studies was the time taken to move the THUNDERBOLT from liner bolt to liner bolt. The original solution was RME’s robotic device called RME THUNDERBOLT STORMPATH. While this idea didn’t proceed, this insight precipitated the invention of the THUNDERBOLT Moil Axis Guide device, or T-MAG, and ultimately to RME’s RUSSELL Elevation Platforms. 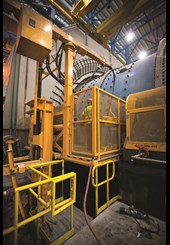 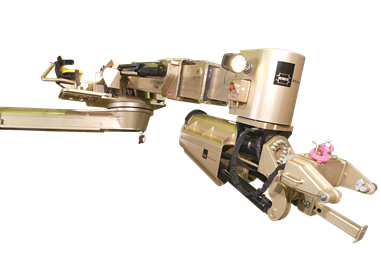 RME’s 100th Mill Relining Machine was built in 2007 for Gibraltar Mine, British Columbia, Canada. With the approval of Gibraltar Mine site management, it was painted gold to commemorate its place in RME history. 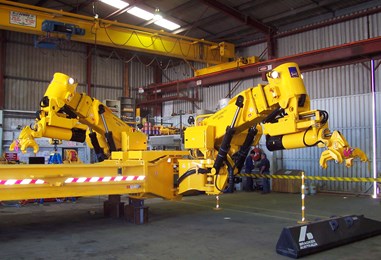 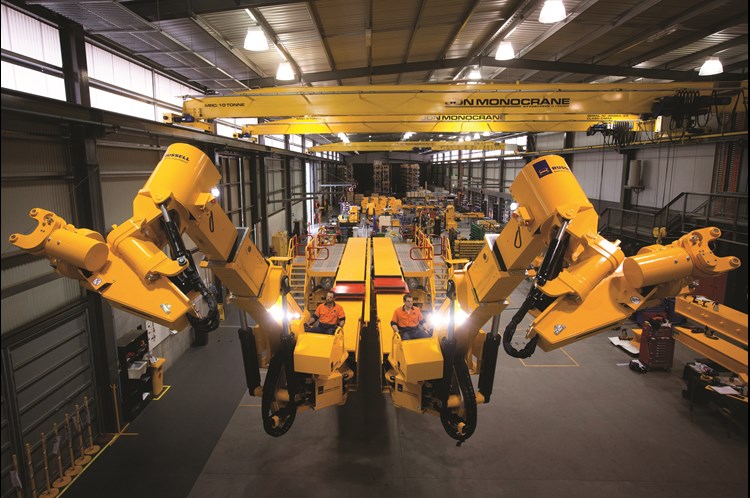 In April 2009, RME completed new workshops on Hursley Road, Toowoomba, Australia. This purpose-built facility provided RME with all the space and resources necessary to manufacture our Mill Relining System technologies and to conduct ongoing product development. 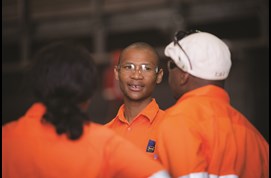 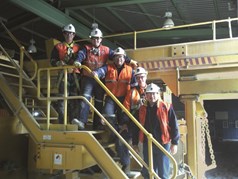 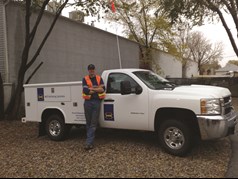 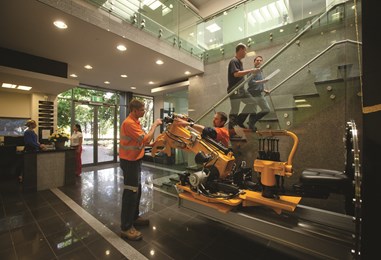 The office portion of RME’s Hursley Road headquarters was completed in January 2010.

The centrepiece of an imposing foyer is RME’s very first Mill Relining Machine, supplied to MIM in 1990. Beautifully reconditioned by RME’s workshop team, this RUSSELL 6 Mill Relining Machine is completely operational and now graces the black granite-clad reception area of this new home.

In 2012, a purpose-built Customer Support and Training Centre was completed, also on the Hursley Road, Toowoomba site. 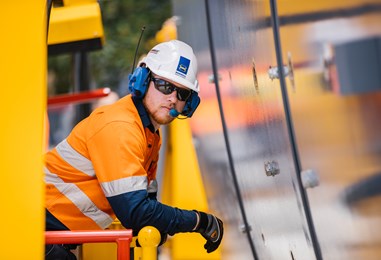 RME hosted a world first exclusive Technology Launch to a global delegation of Customers in June 2017, at its headquarters in Toowoomba, Australia. This event, named THINK OUTSIDE THE CIRCLE (TOTC), was supported by RME Engineers, Technologists and Technicians and included demonstrations and workshops over two days.

RME INSIDEOUT Technology, THUNDERBOLT SKYWAY and RUSSELL SAFETY Products are the current result of years’ of dedicated research and development by RUSSELL MINERAL EQUIPMENT. This represents a significant expansion of RME’s suite of mill relining safety and performance technologies. The aim is to eliminate the remaining environmental hazards by performing relining without anyone inside the mill. 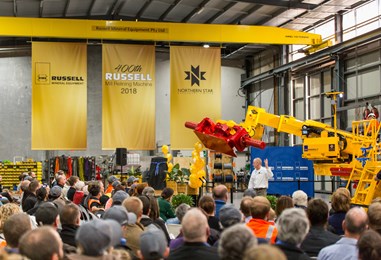 May 2018, RME commemorated the completion of Machine #400, with a family-friendly event that not only focuses on this milestone, but recognises the valuable contribution of RME personnel and their families to the company. Paul Avey, RME Chief Executive Officer hosted the celebration alongside representatives from Northern Star Resources Ltd, the owners of the #400 Machine and special guests from the Toowoomba region. 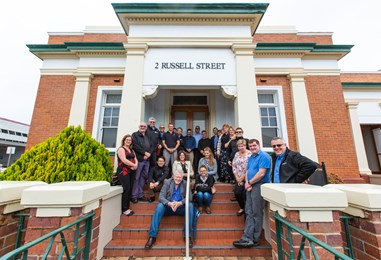 RME announced the purchase of 2 Russell Street, Toowoomba, September 2018. With RME employing over 400 people globally, the expansion brought RME back to their home roots. Russell St is part of RME’s history. A large number of our engineering and shared services personnel worked from 141 and 143 Russell St for over two decades (1989 – 2010). It was during these years that RME’s collegial culture was formed and many fond memories were made. Our move back to Russell St represents a homecoming, of sorts. Russell Street is now home to about 50 RME employees. 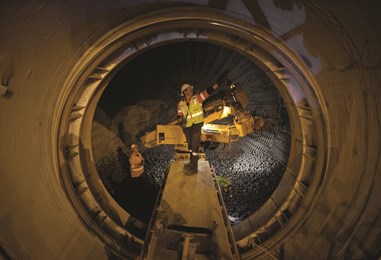 Going forward, RME’s focus is to secure the potential of RME’s Mill Relining System performance for each and every one of our Customers, past, present and future.

Our commitment to industry is to visibly, defensibly lower the operating costs of our Customers.